6 Superfoods to Boost Your Metabolism and Lose Weight with Ease 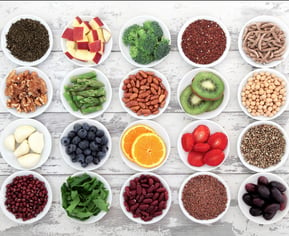 Are you trying to lose weight but can't bear to give up snacking? Although there's no substitute for diet and exercise, recent studies suggest that certain superfoods may boost your metabolism and help you burn fat more quickly than others. If you feel like indulging, try sticking to:

Although most people think of lemons and oranges as the main providers of vitamin C, yellow bell peppers are probably the best low-calorie source of the vitamin. A single pepper contains more than three hundred milligrams of vitamin C, which is more than three times the amount contained in an orange, yet bell peppers have less than half the calories of oranges. Adults with high levels of vitamin C consumption tend to have lower body fat percentages and BMIs. Some researchers believe that this is because it releases a compound called carnitine, which causes muscles to draw more energy from body fat. This makes yellow bell peppers one of the most effective superfoods on the market and a powerful tool in any dieter's arsenal.

Eggs are low in calories and fat but high in protein, containing all nine amino acids in abundance. Eating one hard boiled egg a day will give you 6 grams of protein but only 5 grams of fat and 78 calories. Consuming large amounts of protein makes you less hungry, reducing the chance that you'll snack between meals. Protein also keeps your blood sugar under control, slows digestion, and, crucially, makes it easier for you to build muscle (which in turn raises your metabolism). Incorporating eggs into your diet will thus allow you to burn fat on multiple fronts.

Whey protein powder, which is often used to flavor puddings, smoothies, and yogurt, may be one of the most efficient superfoods available. Recent studies have found that whey releases large amounts of cholecystokinin, a hormone that makes your body feel less hungry. Whey also contains leucine, an amino acid that helps your body build muscle more quickly, leading to a higher metabolism rate.

Defined as chocolate that is at least 70% cocoa, dark chocolate may be the secret to enjoying yourself while losing weight. A recent study found that adults who eat chocolate in moderation tend to weigh less than the control group, which may be a result of chocolate's tendency to reduce stress. The food contains theobromine and caffeine, which have both been linked to lower stress levels. Stress is associated with unhealthy eating and exercise patterns, so the less stressed you are, the easier it is to get your weight under control.

These tiny white seeds contain lignans, or chemical compounds that recent studies have shown to increase fat burning. Lignans spur the liver to produce larger amounts of the enzymes that cause fat to deteriorate. These studies were only performed on animals, but there is reason to believe the seeds have a similar effect on humans. The seeds also contain large amounts of protein, and thus provide a similar benefit to that of eggs and whey. This is good news for hummus lovers, whose favorite dip contains a sesame seed paste known as tahini.

Including lean meat in a well-balanced diet is a way to get a sufficient amount of high-quality protein. Lean meat is also full of iron, which can help boost your metabolism. Lean meat must contain less than 10g of total fat, including fewer than 4.5g of saturated fat in a 3-oz. serving. To qualify as extra-lean, a 3-oz. serving should have less than 5g of total fat and 2g of saturated fat. When cooking lean meat, keep the meat as lean as possible by removing the skin and any visible fat.  Sources of lean meat are chicken breast, turkey breast, most fish, and beef or pork that is labeled “round” or “loin”.

Okay, so technically this isn't a food, but water is nonetheless an easily-available way to raise your metabolism while reducing your calorie intake. Replace soda, lemonade, and sweet tea with water and you'll immediately lower the amount of calories you consume. What's more, your body expends calories warming itself up when you drink ice water. For best results, drink large amounts of water before each meal. This will cause you to feel fuller and consume less food during the meal.

Whether you're seeking to lose weight, maintain your current weight, build muscle, or improve your health in some other way, Jax Nutrition can make your dream a reality. We offer expert meal planning advice, superfoods, diet foods, and other keys to a healthy, enjoyable lifestyle. For more information, visit our website today!